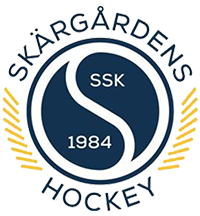 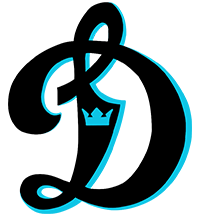 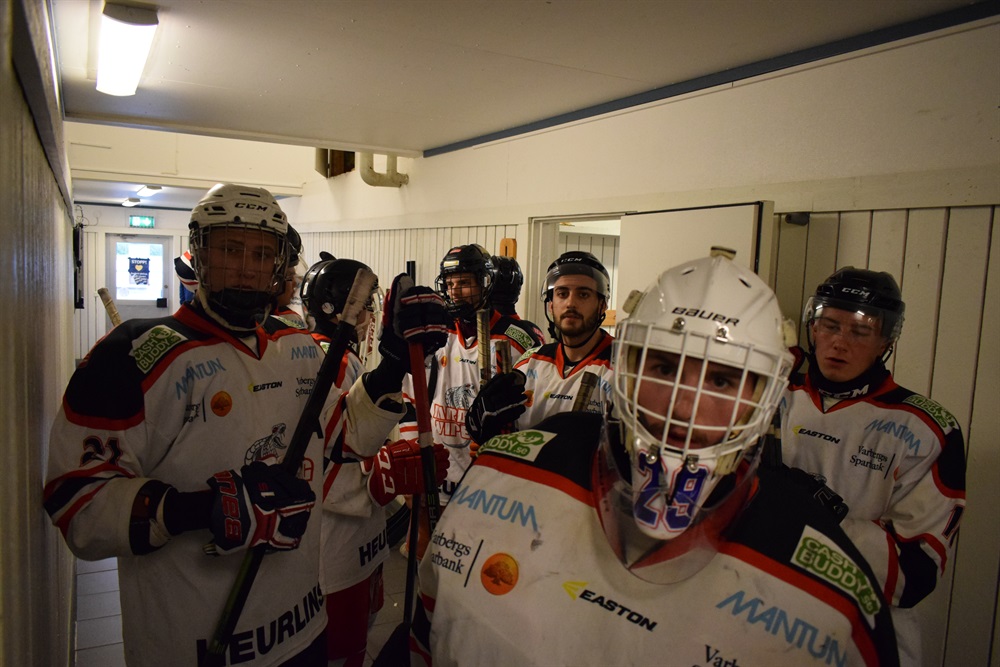 The HC Dynamo Hockey Club has decided under the careful guidance and advisory of the sport federations and governing bodies to collectively pause our licence for the upcoming series this season due to last minute scheduling and availability issues with the Veddige Ishall during week for our evening home games.

With a significant increase in travel and logistics to Bohuslän as one of the two southern-most teams from Halland in the series facing similar issues, combined with the shortage of available players for nearby teams in the region, it was made in good conscience and clarity to loan all of our players to local clubs for the remainder of the season.

In cooperation with our generous sponsors and partners, we will continue to assist and develop our players during their stay in Sweden as we begin to focus and build on our player development program.

We would like to thank our friendly neighbors in Bäcken HC, Kållered Ice Bears, Skärgårdens 84, Stenungsund HF and to our northern friends in Säffle HC and Kramfors-Alliansen for their gratitude and support in assisting us with our players for this season.

We appreciate your kind patience and understanding as we make the transition and will continue to provide news and updates about the club and players during the season!

- The HC Dynamo Board 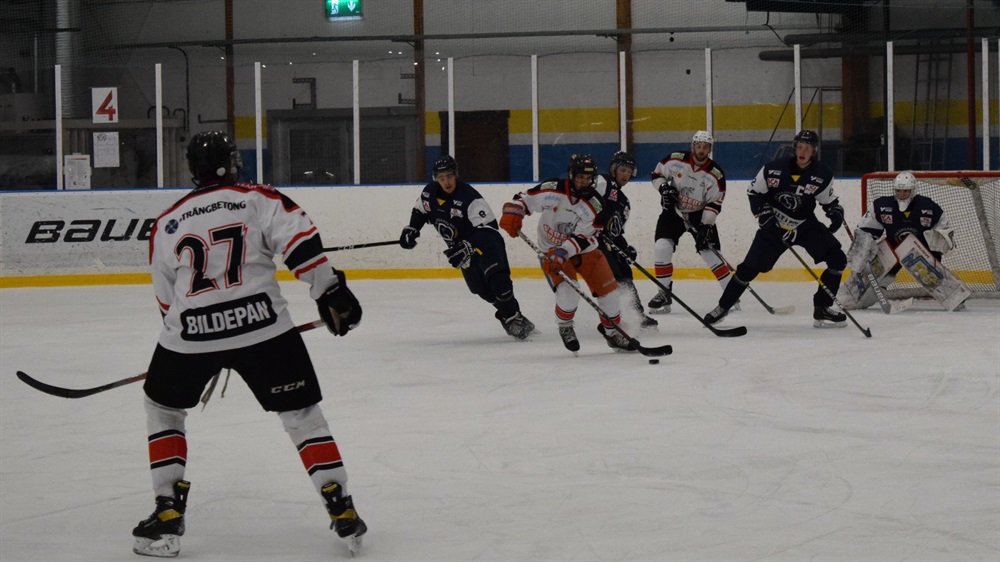 The HC Dynamo Veddige Sea Bandits and Skårgarden 84 met on the island for the second time this week during the final match of a two game exhibition series between the teams on Wednesday evening at the Öckerö Ishall.

Both teams started out the period with plenty of energy and grit until Dynamo gets on the board first at 6:10 with a laser down low from Ilya Kharchenko, assisted by Kliment Baranov for his first goal of the night. A few minutes later, Alexandar Makarin puts Dynamo ahead at 2-0 after going top shelf with a cross ice pass from Michael Klintworth at 10:57.

Heated tensions and intense rivalries started to build up during the middle of the game as Dynamo was forced to play shorthanded for the majority of the period, until Brandon Brazeau burns some twine at 29:59 with a beautiful breakaway goal and triple deke up high to expand Dynamo's lead 3-1.

The third period was a tight battle with both teams making few mistakes and playing solid defensively until Skärgården gets on the board again early in the match closing the gap at 3-2. After a change of momentum from an offensive rush up the ice, Ilya Kharchenko was once again able to find the net with his second goal of the game, assisted by Baranov and Filip Ivanovic with a rocket from the circle making it 4-2 at 48:09. Skärgården was yet able to capitalize on two powerplay goals shortly after at 49:14 and 51:43 to tie the game.

With less than two minutes left to play on the clock, Kliment Baranov finds a way to get it done and pulls Dynamo ahead to the finish line after burying a lose puck off a rebound at 58:04 with a beautiful back hand goal in the slot from Ivanovic and Kharchenko to put the Sea Bandits in the driver's seat with a victory of 5-4.

We would like to thank our friendly northern neighbors, Skärgården 84 Hockey Club for their kindness, support and generosity for hosting this series on the island and we would like to wish them good luck and success as they prepare for their upcoming season in Södra C! 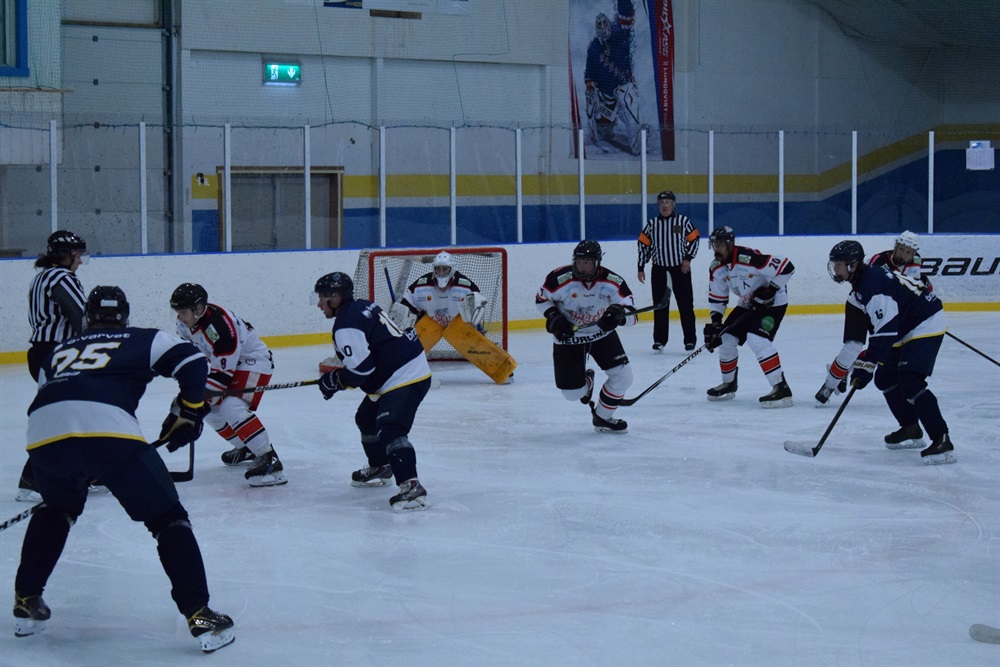 The HC Dynamo Veddige Sea Bandits got off to a red-hot and flying start to the preseason with a pair of hat tricks and brilliant display of offensive firepower on Sunday against Skärgården 84 during the first exhibition game of the year in a pair of games between the two teams this season.

The first period opened up in a heated match with a dominant display of intensity and physical play from both teams until Dynamo gets on the board first with a goal at 8:44 from Ilya Kharchenko. An offensive end to end rush from Alexis Quane-Arsenault was able to put Dynamo ahead 2-0 at 12:55. The Sea Bandits finished off the first period with a 4-1 lead after a beautiful give and go pass in front of the net from Alexandar Makarin to Owen Gouin.

The "Baby Shark" line of Kharchenko, Baranov and Ivanovic were able to illustrate beautiful passing, strong puck possession and offensive dominance in the second period. Dynamo conceded to two short-handed power play goals and finished off the period with a 7-3 lead. Kharchenko was able to net his third goal of the game and first hat trick of the season at 39:40 with a pass across the slot from Michael Klintworth.

The third period was displayed with tons of energy and grit, especially from the second unit of Makarin, Giancotti and Pfeiffer who made good use of excellent offensive and scoring opportunities with Pfeifer bringing it on home with a bomb in mid-stride at the top of the circle at 51:14 from a beautiful one-touch pass off the tape of Giancotti, burning some twine with his first hat trick of the season and second player of the game to send Dynamo cruising comfortably ahead with a 9-4 lead.

Filip Ivanovic was able to find the back of the net, with a one-timer blast from the slot off Ilya Kharchenko at 51:53 scoring the final goal of the game for Dynamo. Skärgården was shortly able to capitalize yet on another power play opportunity late in the game making the final score 10-5 with the shots 43 to 32 in favor of Dynamo.

Our next game is on Wednesday, September 15th at 19:30 as we return to the archipelago for the last of our two exhibition game road series against Skärgården 84.

The Södra A Schedule Has Arrived!

The complete schedule of the Södra A Series has been finalized and officially released.  Our calendar will feature a total of 21 games from October to December in a round-robin style format of 3 games against each opponent, with 11 games on the road and 10 home games at the Veddige Ishall.

For more information on the complete Södra A series schedule, please see the link below:

Come and join us for our season opener when the puck drops at 19:30 on Friday, October 1st at the Veddige Ishall as we kick off the season for the first derby match against our cross-town rivals and our friendly neighbors, The Varberg Vipers.

Tickets, merchandise and refreshments will be available for purchase during all home games. 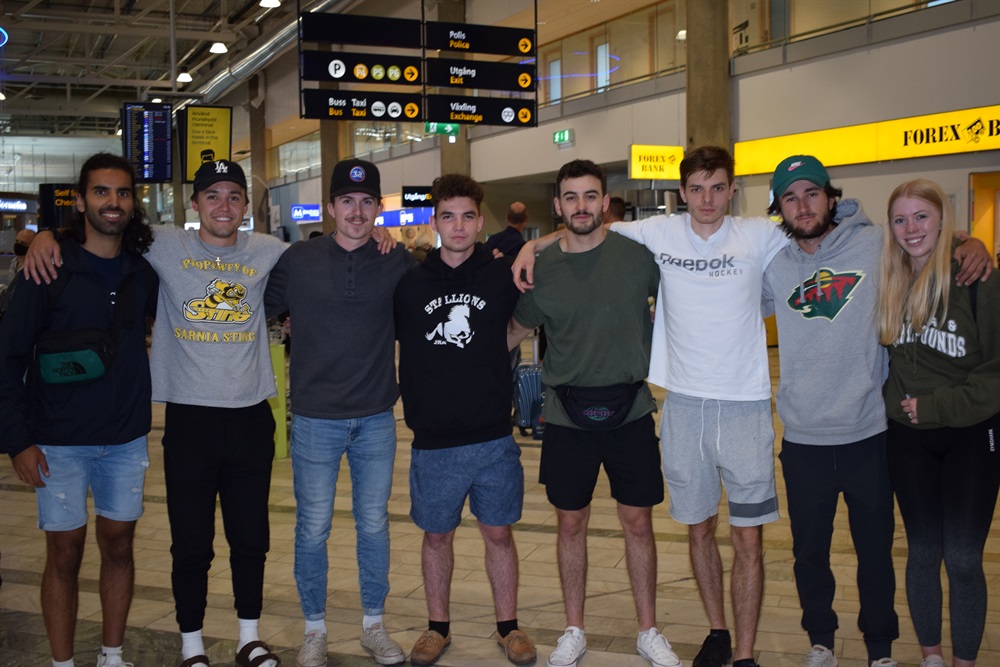 The HC Dynamo Veddige Hockey Club is set to debut their inaugural season with the first wave of players arriving from Canada, Georgia, Netherlands, Russia, Sweden and the United States for the start of camp set to begin on Monday, September 6th.

The team will begin the week with multiple off-ice and conditioning training sessions before hitting the ice for the rest of the week at neutral sites.

The Veddige Ishall is in the final stages of ice preparation, as the players will practice on home ice for the first time on Monday, September 13th.

Training Camp will conclude with two (2) pre-season games as  scheduled:

Dmitry Salvasser Gets Explosive With Dynamo!

Dynamo Gets Nuclear With Alexis Quane-Arsenault!